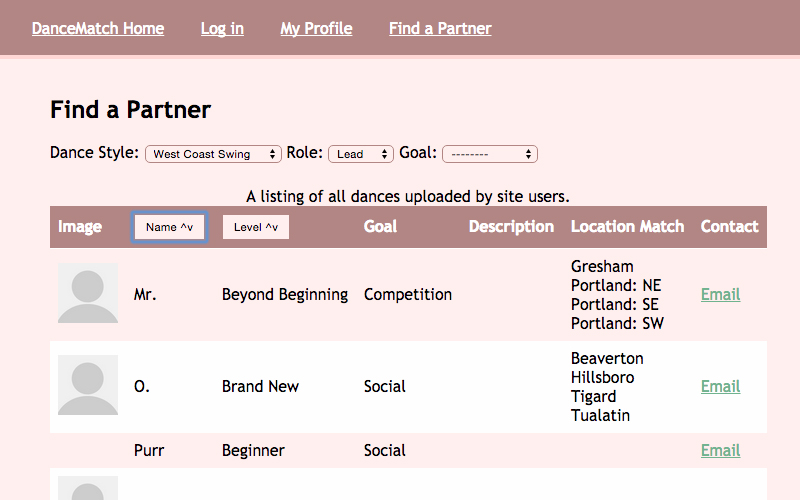 An AJAX app built with Django to connect dancers with practice partners.

The current version of DanceMatch is the MVP for a dance partner matching application. Built with Python and Django on the back end, and Vanilla JavaScript, HTML5, and CSS3 (such as it is) on the front end. I was definitely focused on learning Django and Javascript in this project.

I got the idea for this project from when I took an online HCI class from Stanford. I did some need-finding interviews with people from the local dance community early in the class, and found that many dancers wanted to practice during the week but had no one to practice with. They would take weekly classes or private lessons, and felt like they weren't progressing as well as they would with additional reinforcement between lessons. The hard part was finding someone to practice with, especially in their area, as many dancers drive a fair distance to dance in Portland.

The current version of the app gives you a way to specify which dances you do and what you're working on for each, so that others may find you based on shared goals. It also lets you choose locations you are willing to travel to, so that you'll know right away if meeting with someone would be feasible for both of you. You're able to search for others based on dance and role, with an optional goal if you're specifically looking for a competition or routine partner.

The next steps for this project would be cleaning up the current funtionality: be able to view others' profiles, and automatically filter search results based on overlapping preferred locations. I'd also like to filter out the "Inactive" results, so people can leave their information up but not have it show up in searches if they're not working on it at the moment.

Most of the app is a SPA, but I'd like to get the Image Upload and New Dance forms combined as well; they are currently separate pages, so all of the data has to load again once you submit. I'd also like to let people log out.

In the future, I'd like to implement additional functionality: a simple messaging system to mask email addresses, and helping people find buddies to attend dances through a Preferred Venue model. I've heard from a number of people that it can be daunting going somewhere and not knowing anyone, and some dancers want someone (like a gym buddy) to keep them from backing out at the last minute.

I wrapped the JavaScript in an init function so it would wait until the DOM had finished loading, but since most of the site is drawn based on what comes in from the database, I ended up with a race condition. setTimeout kept my selects from drawing before they had the data to fill in their options.

I had a lot of many-to-many models to fill in my Dance Preferences: Dance, Dance Role, Skill Level, Goal, and Activity (if you're working on this dance right now or not). In this example, I'm drawing the selects in a form for the user to edit a particular Dance Preference. To fill in each option, I saved the model data in a DM namespace and passed each one separately into the drawDropdown function. To further abstract things, I also saved a list of the models I wanted to call in DM.model_list, so I loop through each of those in drawPrefEdit.

For each item, I create an option and fill it with the name of the item, and then set the value to be the item's id, for later retrieval. I've passed in the current value to the drawDropdown so it shows up already selected. I then add the item to the parent select that has been passed in.

I wanted to use the built-in .sort() function in JavaScript, but it didn't allow any parameters to be passed in. I found the idea online and was unreasonably excited about it: call a function with parameters that returns a function without parameters for the .sort() to deal with.

The two things I was sorting by were the person's Name and their Skill Level. Name sorts fine alphabetically, but I had to specify to sort by the the Skill Level's id. is_ascending is based on a CSS class that is added and removed when the column header is clicked.

When all the data has been sorted and filtered, the results table is redrawn.

An event listener calls onSuburbUpdate whenever a Suburb checkbox is checked or unchecked, and it sends a JSON update to the view update_suburb. This allows the user to quickly add or remove a Suburb from their list without having to reload the page.

update_suburb gets the User from the user_id, the Dancer from the User (a one-to-one relationship), and the Suburb from the sub_id, using .filter() so as to not throw a 404 error if the PreferredSuburb isn't there.

The app was first deployed on a AWS Ubuntu server running Apache. I learned more about SSH keys and Linux commands, like how to change permissions, check the error.log file in VI in the terminal, and create aliasing for commands in .bash_profile. There was a fair amount of troubleshooting to set the paths in the .conf file to wsgi.py.

It is currently hosted on heroku with a postgres database. 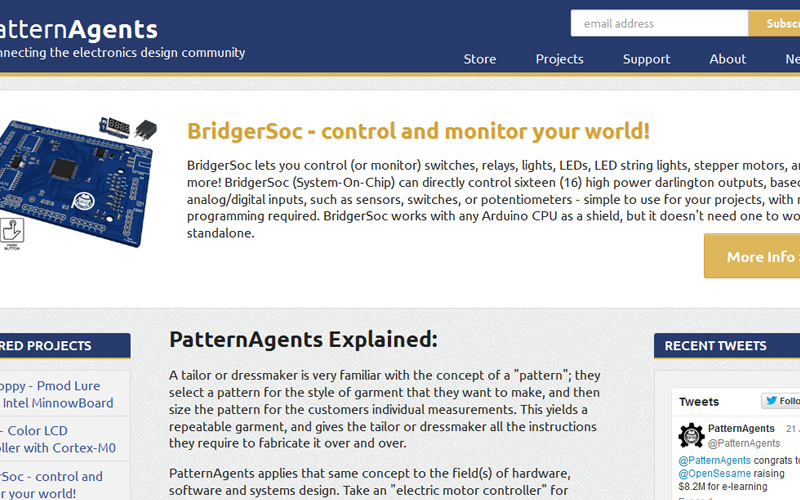 Worked with a small team to build the front end of this Jekyll-based blog, news, and e-commerce site. 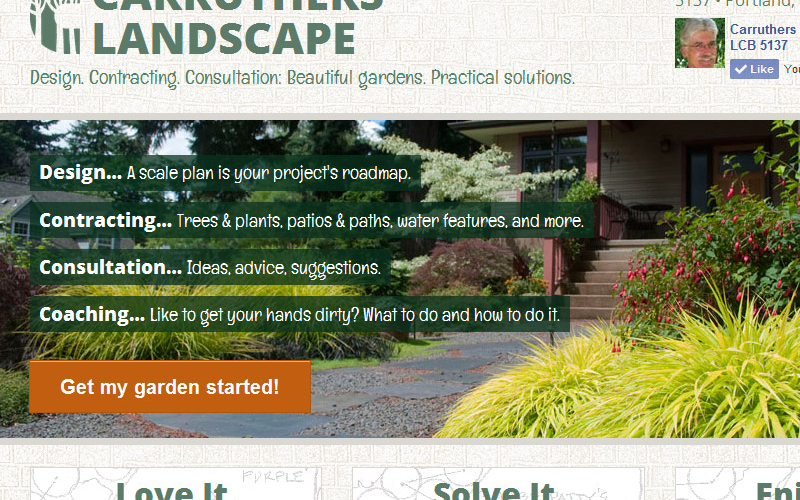 A one-page responsive site for a small business. Built with Zurb Foundation 4. 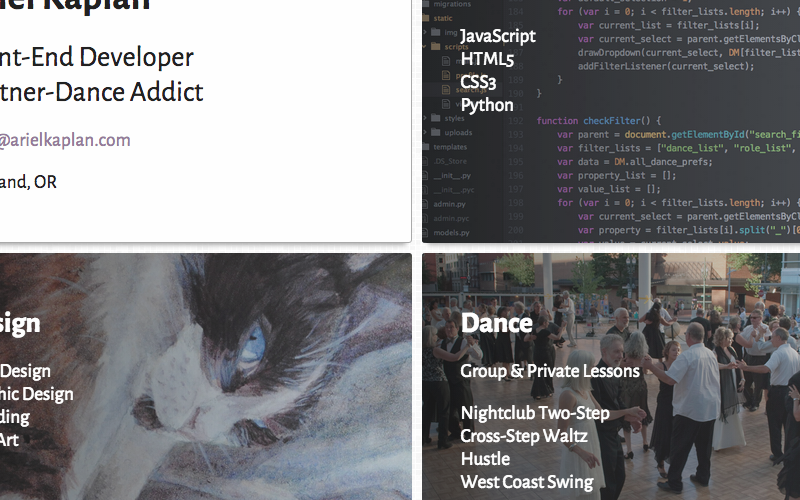 An entry page to my various subdomains. Mostly an excuse to learn Grunt and review Sass.

I really wanted to learn how to use Grunt and to refresh my languishing Sass knowledge, and I needed to update my personal domain anyway. Thus, this tiny page was born.

I went through a few tutorials to get a feel for things, and ended up using these packages:

I had used Sass over a year ago, so while rusty, I was somewhat familiar. I kept the Sass Documentation handy and referenced my previous project, which included partials, variables, nesting, import, and built-in functions like darken.

In future projects, I plan on exploring @extend and @mixin. I'm also very interested in Control Directives and SassScript.

To keep my files a bit tidier, I used the _filename.scss scheme to keep those files from being converted to separate CSS files. Instead, I imported them into my main styles.scss file, so that they would be converted together.

I first imported the normalize.css reset that had been coverted to .scss by kristerkari, and made a _global.scss file to hold all my variables and general styling.

I wanted some visual interest on this simple page, so on hover, the boxes have some subtle changes.

I wanted to make things very easy to click, so each image is a link. On hover, a few things happen:

I also like the trick of a negative box-shadow size to keep the shadow centered underneath.

I wanted to try out flexbox, so I used that in combination with a media query to achieve a readable, responsive layout.

On smaller screens, the boxes stack vertically and stretch to fill the screen with flex-flow: column and align-items: stretch. On large screens, they group into a square by setting the min-width and flex-flow: row wrap.

The background-size: cover was a super easy fix to allow for my boxes to change shape and still keep full coverage with the image. Unfortunately it didn't work properly when I refactored that style away from its background declaration (separate, as each box has a different image), so my code isn't quite as DRY as I might like.

I added a gradient as a second background on top of the image, so that the text would be more readable. I originally was looking at a pseudo-element with a transparent background to tint the image, but it tinted the text as well. It would have made setting a hover state tint easier, but alas. 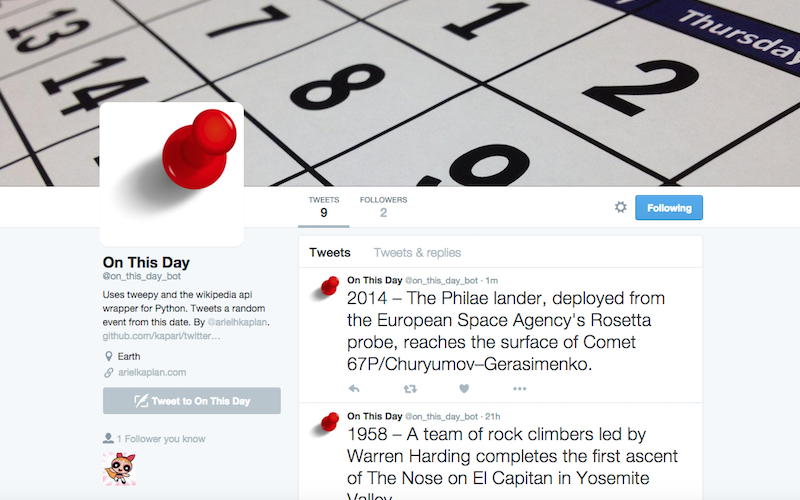 A bot that tweets a random event from this day in history. Uses Tweepy and the Wikipedia Python API wrapper.

I attended the local PyDX conference where there was a Build-a-Bot workshop, but I ended up attending some concurrent presentations instead. Still interested, I forked tpinecone's template from her tutorial and made my own bot tweeting Japanese Fairytales.

I was excited about my success but not feeling much ownership; I wanted to write the guts of the bot myself to do something a bit different, so I decided to explore the Wikipedia API and its Python wrapper to tweet random events that happened on this day in history.

At first I was going to just grab Wikipedia's built-in On This Day page, but it was not as well structured as the full date page, and it felt a bit too simple. So, I imported the datetime module to dynamically grab the full page for the current date.

The get_event function searches for the Wikipedia page specified by the get_date function. It then takes only the "Events" section and splits each event into a list item and randomly chooses one of them. It returns the full string if it's short enough to tweet; otherwise, it truncates the item.

The shell script is for the scheduled task on Python Anywhere. Simply cd into the twitterbot directory and run bot.py. 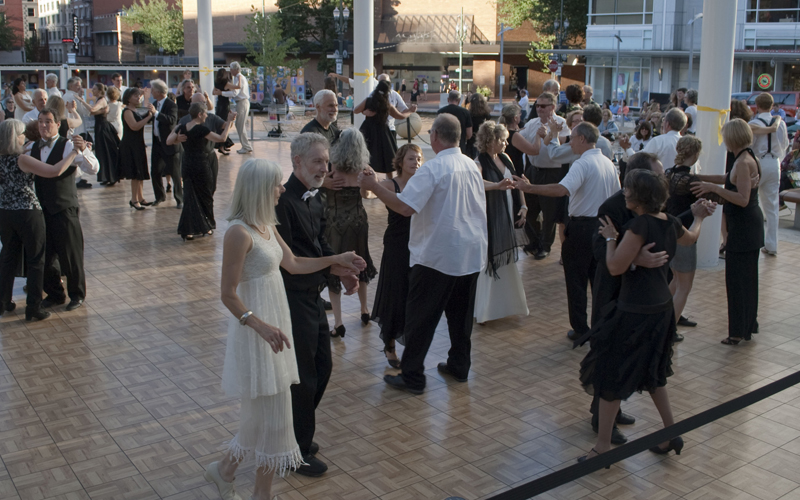 I've been teaching group classes and private lessons for nearly four years, currently out of Uptown Ballroom in Tigard. Prior to Uptown, I co-founded and hosted a twice-monthly social dance for about two years, and taught group classes at various places around Portland.

My favorite dances are Nightclub Two-Step, West Coast Swing, Cross-Step Waltz, and Hustle. I also do a smattering of other dances. 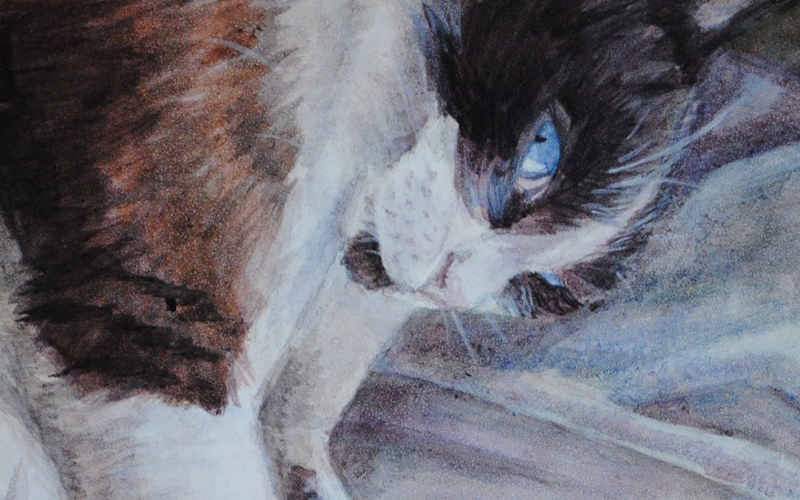 Although I don't do it too often these days, my first love was drawing. I spent some time as a pet portrait artist, enjoying the delicacy and precision of portraiture combined with cute animals. 'Cause cute animals.

I like to take an unreasonable number of photos with my Nikon D3000 whenever I go somewhere pretty.